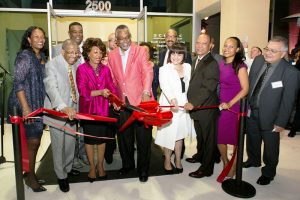 South Central Los Angeles Regional Center (SCLARC) held its grand opening on Saturday, November 14, and tour of the facility at their new site the “Legacy Plaza.” The event included national, state and local elected officials who participated in the program. The afternoon event began on the open plaza with the ribbon cutting ceremony conducted by none other than the Honorable Congresswoman Maxine Waters. Waters remarked on her long-term relationship with the regional center and with the late O.V. Smith, a pioneer in the field of work related to those with development disabilities. The main program then moved into the newly restored auditorium in the Historic Golden State Mutual Life Insurance Building.

The toast to celebrate the event was performed by the leadership of Marsha Mitchell- Bray, Roy Doronila and Reuben Lee. Mr. Dexter Henderson, CEO and Executive Director of SCLARC, thanked everyone and gave the closing remarks. For information as to how you can become involved and make a contribution to the furtherance of SCLARC, please visit their website at www.sclarc.org.