Breanna is a natural athlete who has been participating in track and field events since entering Susan Miller Dorsey High School where she competed and prevailed against most of her opponents.  The 21-year-old track and field athlete also happens to be diagnosed  with autism and moderate intellectual disability. After  high school, she went on to attend Pasadena Community College. There, she also participated on the track  team and was victorious against her typically functioning challengers. 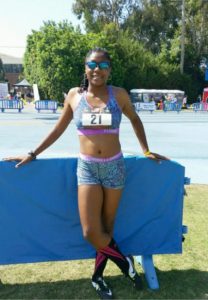 Due to her cognitive diagnosis, she was not able to continue at Pasadena Community College. But while there, this gifted competitor won the Conference Championship in the 400 meter event. She also won the Southern California Championship in the 400 as well. She recently ran in a San Diego track meet and broke the American record in the 400 meter dash for persons with intellectual disabilities. Recently, Friends of SCLARC was able to help support Breanna with her dream of competing in the track and field trials for the Paralympics that will be held 2016 in Rio De Janeiro, Brazil.

Friends of SCLARC, a support foundation of South Central Los Angeles Regional Center  (SCLARC), paid for Breanna to travel to North Carolina where she was chosen as a member of the 2016 Paralympic Team representing the USA in Rio Sept 7–18 of this year. She was also invited to compete in Berlin, Germany and London, England before going to the Paralympic Games. She left on July 12, 2016 for this competition. Please join SCLARC, and Friends of SCLARC, in wishing her the best of luck as she puts her best foot forward on the track!